Mawlyngnba - The Edge of India

Mawlyngbna, a village a few scenic kilometres south of Mawsynram, is located on a hilltop that it shares with three others. From atop the hill, one witnesses the dramatic sequence of the rolling Khasi hills merging into the Bangladeshi plains. This rain-blessed village, with its warm and friendly people is on the tourist map for its diverse natural features.

Within the village are several natural springs that supply clean fresh water year-round and also provide a place for refreshing recreation. On its outskirts is a large broadleaf forest filled with different flora and fauna, the most famous being the endangered predaceous pitcher plant unique to this area. Following a trail north under jungle canopy, through streams and brooks, there is a plateau of rock and grass that extends endlessly towards open blue skies. Here, embedded in the boulders are the fossils that have put this village on the geological map. Following the trail further west takes one unsuspectingly into a land where folklore is alive: along a snaking rivulet are the grounds of a fabled animal market place – Ka Iew Luri-Lura. Here are impressions in the rocks that resemble animal footprints which, according to legend, are a record of a meeting in a time when they could still talk. The many streaming waters that are found here form cascades both small and large, the most notable being the Um Diengkain and Ar Phalat waterfalls which are also fertile breeding grounds for different types of fish.

In order to showcase its culture the community holds local dances, displays their handicrafts like handlooms, baskets and implements at the village museum. They have also preserved ancient rest-areas along the village pathways.

The Mawlyngbna Traveller’s Nest (which will be opened to travellers in October 2013) is built, owned and managed by Mawlyngbna Multipurpose Cooperative Society Limited comprising of enterprising youth from the village who view Village and adeventure tourism as an alternate livelihood option for them and for other youth of the area.

Mawlyngbna remains lodged in the clouds like the huts the Khasis traditionally descended from – a birthplace of legends.

Activities to explore and experience: 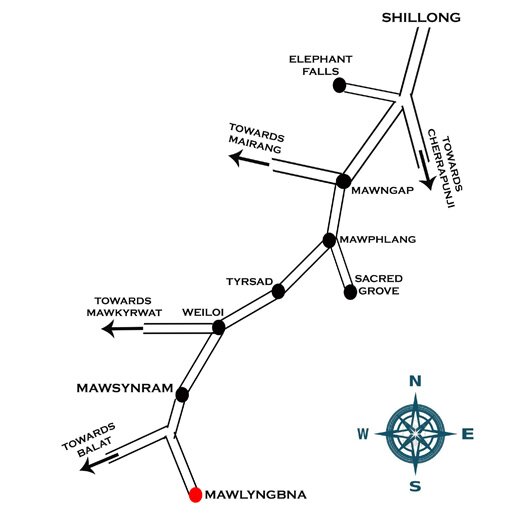